Artists Who Use Iconography

Joe Coleman’s paintings reference Spanish-Mexican religious iconography and his intricate and obsessively detailed images often feature well-known criminals and outsiders, whom Coleman seems to consider himself to be. 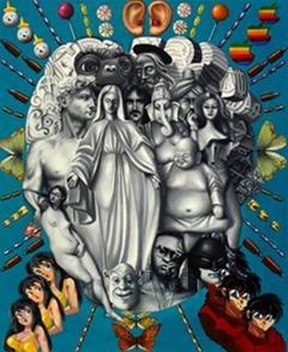 Payosova constructs a visual language where the traditional black and white photographic imagery is mixed with the iconographic and symbolic elements of Russian Christian Orthodox culture from the twelfth to fifteenth centuries.

The work of Joe McWilliams has explored the preservative powers of selective memory. To do this, he has adopted the use of the icon form to enshrine images of political leaders from both the loyalist and republican tradition, such as Edward Carson and Padraic Pearse. He presents them as multiple haloed images within one work. We see their images progressively fade and decay within the sequence, paralleling a physical aging process as they reach a more ‘sanctified’ state. Their power to fuel current events, however, increases as their iconic status develops.

While the facial features of these political leaders break down, the symbols of their respective ideologies (an orange sash, the tricolour) metamorphose into states of fragmented and filtered light. It is noticeable that this refracted light contains ultimately much the same mixture of colours, in the sense that they spiritually fuel the same problem. There is, too, the sense that an iconoclasm is required by way of revisionist history to exorcise their power. McWilliams cautioned against any romantic view of the past when he said:

Political heroes of one generation are canonised by later generations and these saints and their slogans might well be as relevant to today’s problems as witchcraft is to modern medical practice … Yeats’s ‘terrible beauty’, like Emmet’s speech from the dock, is stirring poetry, but their cloak violence with grace and death with glory.’ 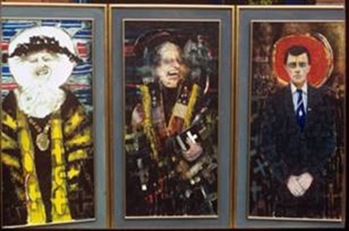 May the Lord in His Mercy be Kind to Belfast

McWilliams has also, in related works, indicated that contemporary figures such as Gerry Adams and Ian Paisley are already laying down iconic status. In A&B Icon (1989) […] a triptych of images of Gerry Adams has the Sinn Fein leader with ‘A’ and ‘B’ written on each hand. ‘A’ stands for Armalite rifle and ‘B’ for ballot box, categorising the continuously asserted duplicity of the Sinn Fein position on the use of violence and the election process. The painting has to do with the legacy of that position. As the images of Adams fade, it is the hand with the ‘A’ label that endures.

Anyone who has lived in Belfast for any length of time is fearful of the nightmarish doorbell ring that could, by accident or design, mean yet another hallway killing. It is a working class home with (a favourite Kindness device) the iconic faces of Gerry Adams and Ian Paisley on the wall paper. Kindness depicts the assassins as terrified people. The driver of the car sees himself in the interior mirror: a dramatic confrontation with conscience as he also looks back on the carnage in which he has participated (Kelly, 1996:142).

The woman at the back of the room is reminiscent of the Madonna with Child. 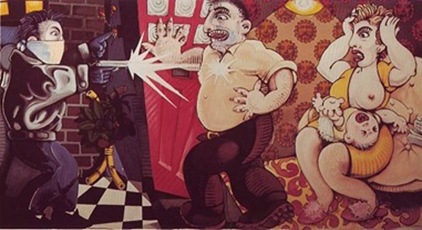 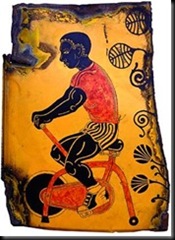 We know the ancient world by way of the incomplete. Why not the New World? Except here, unlike the battles of the Lapiths and Centaurs, good is not necessarily triumphant. Hermes, by way of Greek pottery, cycles on an exercise machine, determined to go somewhere, be somebody (a contender!). All of this extends quite naturally from the pre-New York interests of the artist: the humour, the detail, the stylistic and material invention and the political/social concerns. (Kelly, 1996:92-93).