Dietrich (2003:17) states that there are no practitioners who are predominant in the genre of religious photography, but Julia Margaret Cameron and Oscar Rejlander appropriated and used religious iconic images from art history in their photography. She adds that Fred Holland Day also uses ‘sacred subjects’ in his work.

Deitrich (2003:17) states that in the early nineteenth century, there was a debate about whether photography should only be used to document reality, as an aid to memory, or whether it was an art form in its own right. She adds (2003:17) that it was natural for photographers to continue in the tradition of painters, so the early photographers created theatrical scenes and posed photographs depicting biblical stories which were reminiscent of Renaissance paintings. She explains (2003:17-18) that postcards illustrating religious scenes were very popular at that time.

Dietrich (2003:18) states that these photographs were powerful and gave credibility to religious scenes, suggesting that they occurred in the manner in which they were photographed. 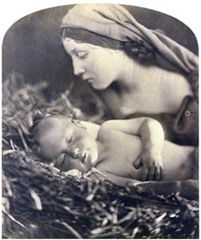 Deitrich (2003:19) states that Julia Margaret Cameron’s influence came from literature, Renaissance and pre-Raphelite painting and the bible. She was not using the Christian iconic image to make the association with religion, but drew on the symbolism of the icon. Light and Love (1865) drew on the bond between the mother and child and the undying love between them.

The end of the nineteenth century witnessed many changes in society and the art world and Christian beliefs were being challenged (by Darwin, for example). Technological advances were also being made in photography, such as the invention of the Kodak box camera, where ordinary members of the public could now make their own images. Deitrich (2003:20) explains this why the Pictorialists formed – to distance themselves from the snappers. Deitrich (2003:21) states that Pictorialism was heavily influenced by impressionist painting. The elements they adopted were – a control of composition, tone, simplicity and reference to narrative and symbolism, soft-focus with a suppression of detail and expressive and suggestive qualities with a mixture of real and artificial elements. She (2003:21) adds that they provided a ‘technique well suited to the creation of devout images’. (Perez, 2003:15).

Fred Holland Day produced The Last Seven Words (1898) and Crucifixion (1898) amongst others. 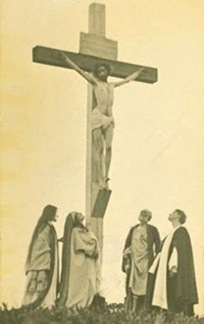 Day acted as a catalyst for his increased interest in religion, which led to him producing the work he called his ‘Sacred Stuff’.

Deitrich (2003:26) Religious iconography re-emerged in photography in the postmodernist period.

The development of post-modernism had, at its core, the idea of identity:

Since so much of the newest art is concerned with issues, especially those to do with identity (cultural, national, racial or sexual), it is often easier for the viewer or critic unfamiliar with a particular situation to approach the artwork through easily identifiable content rather than through nuances of style. (Lucie-Smith, 1995:24)

The issue of identity had become a central force in the re-emergence of the religious icon in photography, as the concept of Christ has become more of a symbol to express ideas and concepts outside the boundaries of religion. (Perez, 2003:24) (Dietrich, 203:27)

Deitrich (2003:28) explains that the application of personal interpretations and of a less doctrinal manner, to the image of Christ is most evident in contemporary photography and that post-modernists use religious imagery for its power, but have to respond to a loss of impact.

The images that mobilize conscience are always linked to a given historical situation. The more general they are, the less likely they are to be effective (Sontag, 1979:17)

Deitrich (2003:28) says they do this by personalising the image, so the new meaning is ‘localised’ to the individual.

Deitrich (2003:28) says that there are no religious depictions in Judaism and Islam, but artists from these denominations still use Christian iconography (Madonna and Child, Last Supper, Crucifixion) in their work.

Deitrich (2003:29) explains that Da Vinci’s Last Supper has been the basis of a number of works by contemporary artists. 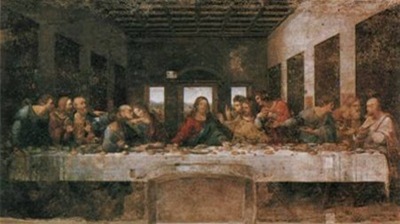 Deitrich (2003:28-29) explains that Adi Nes’ Untitled (1999) combined Christian symbolism with current issues to create an image with political relevance and by using religious iconography in the form of Leonado da Vinci’s Last Supper (1498), he is commenting not only on the fate of the soldiers in the image and the future of Israel, but questioning the religious acrimony and betrayal within the society that these Israeli soldiers find themselves in. 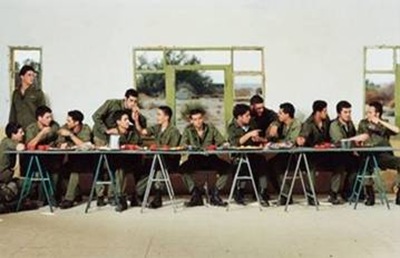 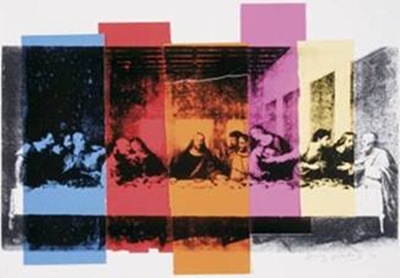 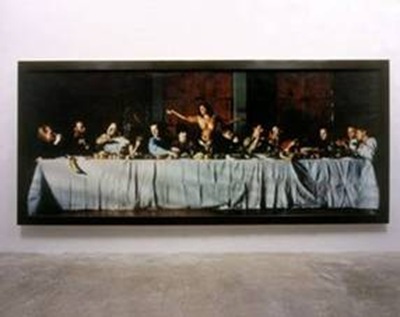 In Sam Taylor-Wood’s Wrecked (1996), The Christ figure is portrayed by a woman standing with her arms outstretched in the style of the crucifixion, surrounded by a table of men, all of whom appear to be ignoring her. Deitrich (2003:29) says that what was once iconic imagery – what was once a matter of life or death – is now a game.

The Madonna and Child

W Eugene Smith’s Tomoko in Her Bath (1967) which shows a young, naked child being bathed by her mother. Deitrich (2003:30) explains that this is a ‘staged environmental portrait’ that draws attention to the mercury poisoning that she suffered as a baby.

This image is extremely similar to Michelangelo’s Pieta. 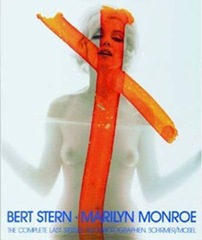 Deitrich (2003:31) states that Bert Stern’s image of Marilyn Monroe in 1962 Marilyn’s Last Sitting was her final photoshoot and the image of her naked, arms outstretched with a simple cloth around her waist, brings to mind the crucifixion. Monroe drew the orange cross onto the negative. Another interpretation is that the crucifixion pose with a cross on the negative encompasses the suffering she endured throughout her life which only acquired meaning in the light of subsequent events. 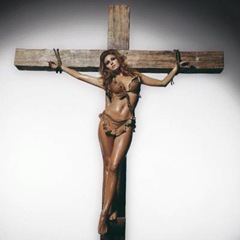 In Terry O’Neill’s image Raquel Welch (1966), A A Gill observes that Welch crucified on the cross was an obvious metaphor for her crucifixion by the press (O’Neill,2003:12)

Deitrich (2003:32) explains that the rise of post-modernism coincided with the rise of feminism and the gay movement of the early 1970s and came after the dramatic civil rights achievements in the US in the last 1960s. She adds that homosexual, feminist and ethnic artists have adopted the notion of suffering and ‘resurrecting’ themselves through photography. 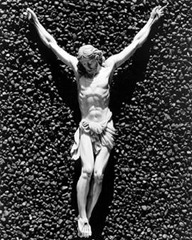 Deitrich (2003:32) states that Mapplethorpe was known as ‘an iconographer who was preoccupied by the construction and interpretation of his pictures’ (Jeffries, 1997:297). His image Christ (1998) shows a statue of Jesus on the cross lying on a bed of stones. Here Mapplethorpe is reflecting on the ‘moral and phychological wounds of the ostracised who bear the cross of their sexual preferences’ (Perez, 2003:24).

Andy Warhol also dealt with suffering and death in his works, but does not appear to represent this by using religious iconic imagery.

In Dennis Speight with Calla Lilies, Mapplethorpe portrays his subject as artists would have portrayed saints and Mapplethorpe uses the male black body to comment on race as well as gender and the lilies symbolise death.

Deitrich (2003:33) says that this kind of layering is common in post-modern work and in Derrick Cross, a black torso is shown with his arms outstretched and a cloth around his middle. Here Mapplethorpe is not only using Christian religious symbolism to suggest suffering, but also the physical beauty of a Renaissance David to shown perfection in the male body, an obvious homoerotic theme. Dietrich (2003:33) also states that the subject is presented with his arms raised as Christ on the cross, and it has been suggested that this intended to evoke thoughts of the Black Power movement (Jeffrey, 1997:297)

Deitrich (2003:33) says that Christ can be seen as a gay icon, as is St Sebastian, and thus the renewed interest in them in an era where gay identity is a real feature is post modernist art and it an idea that has been present for centuries:

Jesus has been the only male nude, or half nude, available to the creative imagination since the Renaissance, […] Caravaggio’s Flagellation turned up a couple of years ago […] I can’t recall a more obvious tactile celebration of the male torso. You could actually feel Caravaggio running his hand across Christ’s body and loving it. (Januszczak, 2003:5) 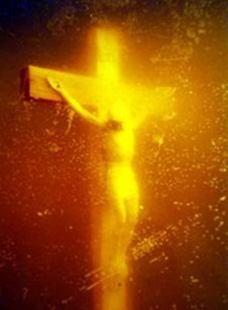 Deitrich (2003:34) mentions that Andres Serrano’s Piss Christ (1987) and Mapplethorpe’s homoerotic images were cause for debate about funding and censorship. She adds that the strongest objection to Piss Christ was that it was deemed blasphemous as Serrano had sullied an important religious icon with his urine. She further adds that the image is aesthetically pleasing, but it is when you read the title that you are jolted out of your comfort zone.

Deitrich (2003:39) concludes by stating that iconographers began to invent their own reality and photographers were no longer a servant of religion – they found themselves a new role. She adds that as photography developed, some artists used religious symbols to change opinions in society and that religion’s most iconic imagery has been taken out of its religious context.

Dietrich (2003:39) points out that the camera is no longer a tool for capturing the reality of a biblical scene, but used to represent a message found in the symbolism of the iconic image.

Lucie-Smith, James (1995) Movements in art since 1945: Issues and Concepts, London: Thames and Hudson