What is an Icon?

The definition of the word ‘icon’ in the Concise Oxford Dictionary is a ‘painting, mosaic, etc, of sacred personage, itself regarded as sacred’ and defines the word ‘iconic’ as ‘(the nature of) an image or portrait (of statue) following a conventional type. An icon is defined as an image or a representation of something. It could be a representation of a picture of a saint, which is traditionally used in the Eastern Church in particular. An icon is an important and enduring symbol which is the object of great attention and devotion. In other words, an idol.

C S Peirce defines an icon as any sign that ‘may represent its object mainly by its similarity’ which can include anything from diagrams and maps to mathematical equations and metaphors (Mitchell, 1986:56).

La Grange states that an icon is an image or symbol that represents something else, for example, a cross for Christianity and that, originally, the word had religious connotations, but now it has a more broader use (La Grange, 2005:240) and Morgan and Welton believe They also state that at the heart of any culture, there are a number of heavily used signs which acquire rich connotations and which convey powerfully stable meanings, the word ‘icon’ being taken from the religious pictures of Orthodox Christianity and which are felt to embody the power of what they portray. (Morgan and Welton, 1986:97) 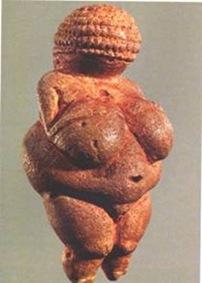 Wells states that icons are valued for their realism and for their reverence towards a sacred object and they are traditionally the representation of Christ and saints. (Wells, 2003:203). She adds that contemporary secular icons include the Royal Family, politicians and film stars and are more likely to appear as photographs. (Wells, 2003:203). Wells adds that these photographic icons appear to be representationally faithful to the object and that photography is a cheap and efficient means of promoting secular-sacred objects for mass consumption (Wells, 203:203). However, La Grange states that relatively few photographs are regarded as iconic. (La Grange, 2005:240).

Morgan and Welton state that when looking at pictures of an astronaut and one of President Kennedy, American viewers (of the 1960s) bring to them a wealth of experience and emotion (Morgan and Welton, 1986:97). They add that:

The newly-dead politician had in his life expressed the ideals and ambitions with which many Americans also endowed the space project. Kennedy himself used the phrase ‘new frontiers’ to describe the spirit which he wished to encourage in American society and in doing so, he was asking to be idenfied with the figure of the pioneer whose covered wagon had tamed the wild west.(Morgan and Welton, 1986:97)

Morgan and Welton add that this image is an important key to the American imagination and that it is an icon which continues to produce the same popular response. (Morgan and Welton, 1986:97)

Morgan and Welton state that for many people, the astronaut appeals to people as a person who strikes out an independent but difficult path “away from the safe but oppressive ancestral home”. (Morgan and Welton, 1986:97)

Morgan and Welton state that if we look at an image of a British politician photographed before a warm hearth, although we each may have our own personal connotations of that sign, these will be swamped by the collective connotations of the community. They explain that the hearth is traditionally the centre of family life in Britain and has connotations of security, companionship and acceptance, which can be used as a metaphor for all these aspects of a party’s policies (Morgan and Welton, 1986:97-98) 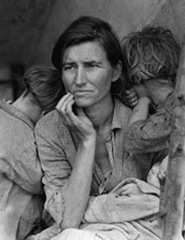 La Grange believes that Dorothea Lange’s Migrant Mother is regarded as iconic in several ways – by representing the work of the FSA and rural poor and by representing motherhood (La Grange, 2005:240) and Koetzle notes the comparison to the Mother of God with the Christ Child (Koetzle, 2008b:30).

Wells states that Migrant Mother soared to the status of icon, and became the hallmark of Lange herself (Wells, 2004:44). Fisher, cited in Wells (2004:44-45) argues that the ‘image of the maternal’ was one of the principal ideological props the FSA photographers used to construct an American community under threat. However, Roy Striker states that the incessant picturing of women with their children was not a conscious political device used by the FSA. (Wells, 2004:45) Fisher also states that it is one of the most reproduced photographs of the period and could be said to stand iconically for the Depression and adds that the way the image was cropped and contextualised revealed how much the image of damaged femininity symbolised the crisis of community for the American public – the way she holds onto her children suggesting the power of maternal values to overcome the most dire of circumstances – she has lost everything, yet stoically keeps her family together (Wells, 2004:45).

Wells (2004:45) states that only an urban audience could give mythical status to the land, but it is the mother which reaches universal iconic status. She adds that Halla Beloff wanted to grant the image an iconic status which would take it out of the realm of representation altogether (Wells, 2004:46). Beloff stated: 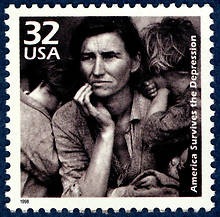 Such is the power of the camera that we can easily think of photographs as having a kind of independent reality. Dorothea Lange’s Migrant Mother is a picture that has entered Western consciousness. She is not a mere representation. (Wells, 2004:46-47)

Wells adds that part of its iconic power derives from its multiple appearances over the years, in many contexts and forms. (Wells, 2004:47). It has appeared on stamps and reference has been made to it in magazines such as Bohemia Venozolana and Black Panther magazine. 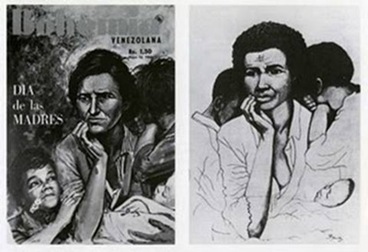 I do not need to remind my readers of the power of images – a power that includes their ability to exceed the original impulse of their creation. For instance, the troubling story of Lange’s ‘Migrant Mother’ , told and retold, offers with acute poignancy an example of discourse as repository of meaning – the photograph as much as its checkered history includes a woman and her children, a photographer, a government bureau, popular magazines, museums, scholars, and a changing public – an image and tale composed, revised, circulated, and reissued in various venues until whatever reality is subject first possessed has been drained away and the image becomes icon. (Wells, 2004:47)

“Whenever I photograph, I do not molest or tamper with or arrange … I try to [make a] picture as part of its surroundings, as having roots … Third – a sense of time … I try to show [it] as having its position in the past or in the present …”  (Koetzle, 2008b:30) 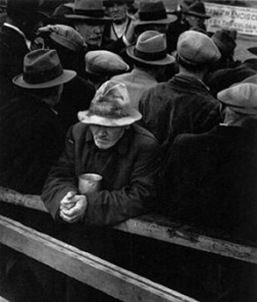 Koetzle notes that, ironically, the framing actually chosen by Lange is so narrow that her tent in the background is not recognizable (Koetzle, 2008b:30) and he adds that the sense of time is difficult to determine, and is only apparent because of the children’s 1930s haircuts (Koetzle, 2008b:30-31). Regarding ‘setting up the scene’, Koetzle states that Lange approached the family slowly, taking pictures all the while, giving them the chance to pose themselves for the camera and that initially, the children were looking into the camera and that it is only in the final frame do they turn away, which demonstrated to Lange their condition as the social outsiders which she had first documented in 1933 with her photograph The White Angel Breadline (Koetzle, 2008b:31)

Koetle (2008b:30) states that the picture was successful because its balanced composition, or reference to the: “dignity and essential decency of the woman facing poverty” (Denise Bethel), or to the picture’s simplicity of means, its restrained pathos, and its mute autonomy of language” (Robert Sobieszek)

La Grange believes that the iconography of power is apparent in Bob Cooper’s photograph of Robert Mugabe (La Grange, 2005:196):

The bulky armchair is appropriately throne like, the gold ring and watch peep from beneath the sleeve, indicating that he is a ‘big man’ in the African tradition, a man with resources who can help those who curry his favour. And behind him are arrayed the usual tableaux of enforcers: the senior cop, garnished with braid and medals, and the security agent, complete with aviator shades, goatee and moustache, and double breasted jacket – all the better for concealing the shoulder holster beneath its bulkier cut. And underneath them all, of course, that old cliché of power, the red carpet. (La Grange, 2005:196-197) 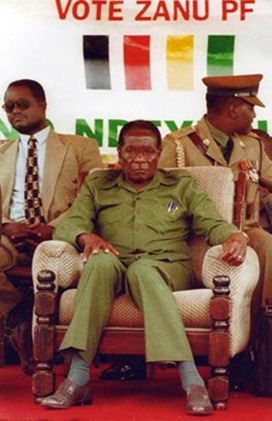 So, it seems that, for an image to become iconic, it has to ….. used frequently and in different ways. Contain familiar signs which connote other meanings.

RhetoricaLens (2010) state that an iconic image cannot be predetermined, but involves ‘encoding’ (message construction) and ‘decoding’ (message consumption) by a producer and consumer alike. They add that photojournalistic image create cultural frames and provide significant ways for us to perceive and understand our surroundings, values and history. An example of this images of ‘ash-covered, disorientated New Yorkers wandering in the rubble of the World Trade Center, which are similar to those images from the fallout of the atomic bombs in Japan.

RhetoricaLens (2010) believe that iconic photos have achieved a social status beyond their mere visual representation of fact, to symbolic American themes.

RhetoricaLens (2010) state that Joe Rosenthal’s photograph of the flag-raising in the battle for Iwo Jima evoked an immediate and positive reaction that has withstood the test of time. 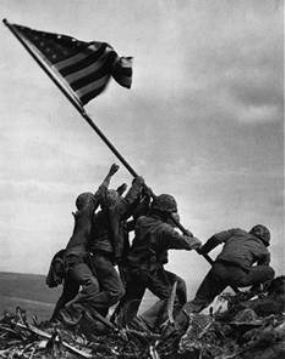 RhetoricaLens (2010) believe that a significant reincarnation of the Rosenthal photo is in ‘Ground Zero Spirit’ by Thomas E Franklin. 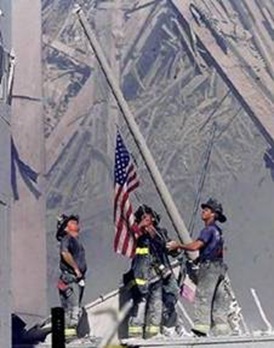 Suddenly a picture surface that represented the values that Americans aspired to – teamwork, a job well done, courage, valor and most of all, a symbol that marked progress toward victory over a fanatical enemy… This new picture … warms our soul because it instantly recalls the history that was somuch a part of that other (Iwo Jima) picture. The images and emotions intertwine; the decades blur. (RhetoricaLens, 2010)

RhetoricaLens (2010) citing Hariman and Lucaites describe the Franklin photo as the first instance of an iconic photograph being created out of the template of a precdecessor. Both these photographs were taken of an unfolding event, amid great loss. What is different is the orientation of the human figures:

The marines gaze at the ground, struggling en masse to plant the flag in inhospitable, rocky, and unwelcoming ground.

The firemen’s gaze is directed upward, toward the flag, adjusting its folds and presentation, making the flag the focal point of the scene and attesting to its particular symbolic role on that day.

RhetoricaLens (2010) citing Hill and Helmers state that interpretations of the Iwo Jima image vary across communities who overlay their social and political commentary – to some the Franklin photograph was a reminder of the discriminatory policies that limited the women on the FDNY to 25 out of 10,500 firefighters. 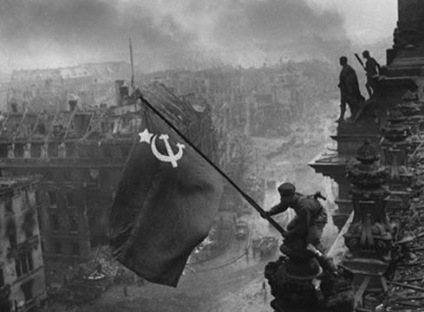 Yevgeny Khaldei’s photograph of the raising of the communist flag on the Reichstag, taken in 1945 was inspired by Rosenthal’s picture.

RhetoricaLens (2010) Terrorism, Security and Diplomacy through the Lens of